Which are the Big Canadian banks?

The ‘big five’ refers to the top banks in Canada: Toronto Dominion, Bank of Nova Scotia, Canadian Imperial Bank of Commerce, Bank of Montreal, and Royal Bank of Canada. Although these banks have a combined share of more than 90 percent on the Canadian market, they are, in fact, international banks with branches and offices in United States, Asia, Latin South America and the Caribbean. 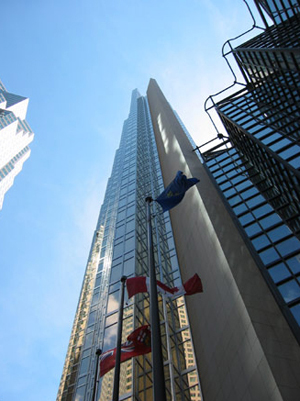 traded under the ticker TD on the stock exchanges in Toronto and New York.

Bank of Nova Scotia - Scotiabank is headquartered in Toronto and has over 2,000 branches and offices on the territory of Canada and around the globe. The shares of the third largest Canadian bank are publicly traded on the Toronto and New York stock exchanges under the ticker BNS. The Bank of Nova Scotia offers various financial and banking services among which checking and savings accounts, telephone and online banking, financial planning options, personal loans, lines of credit, retirement savings plans, mutual funds, and guaranteed investment certificates, among others.

Bank of Montreal - BMO is the oldest bank and the sixth largest banking institution in Canada. Its shares are traded on the NYSE and TSX under the ticker BMO. The bank employs more than 36 thousand officials and operates over 1,100 offices and branches at home and internationally. The bank offers a full range of services and banking products tailored for individual clients, small and medium-sized business entities, corporations, and government institutions. Among the bank’s products and services are checking/ savings accounts, fixed rate and variable mortgages, mortgage insurances, personal loans, loan consolidation, lines of credit, corporate banking services, investment advisory, etc. At present, the bank is evaluating opportunities for further development through new branches in China and India.