Who was the first prime minister of Canada?

The first Prime Minister of Canada is Sir John A. Macdonald who was a dominant figure in the Canadian Confederation. He was a businessman, lawyer, politician, and prime minister. Macdonald served as a municipal alderman in Kingston and was a member of the Province of Canada’s Legislative Assembly between 1844 and 1867. In 1847, he was appointed a Receiver General and was an opposition member of parliament between 1845 and 1854, in 1858, and between 1862 and 1864. Macdonald became Joint Premier and served together with Étienne-Paschal Taché between 1856 and 1857. He acted as a Joint Premier between 1857 and 1858 and between 1858 and 1862 (serving together with George-Étienne Cartier). Because of the Pacific Railway Scandal, the Conservative government had to resign in 1973. The liberal government of Alexander Mackenzie took over. The Conservatives returned to power in 1878, and Macdonald became Prime Minister. The Canadian Pacific Railway was completed during the Prime Minister’s second administration.

In 1879, the country became a high-tariff nation, similar to Germany and the United States. The high tariffs aimed to build and protect the Canadian industry. The machinery and equipment for textile production entered the country free, but the tariff on finished textiles was 34 percent. The Prime Minister argued in favour of even higher tariffs during his whole political career. 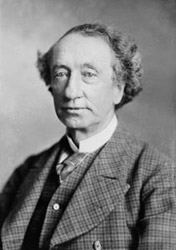 During this period, Canada also sent Sir Alexander Galt as its first diplomatic representative in Britain.

The government of Macdonald subsidized the transcontinental railroad project, granting $25,000,000 and 100,000 sq. km of land. The entire railroad project was very expensive for a country of just 4.1 million inhabitants. The railroad was slowly built between 1880 and 1885, but the Canadian Pacific Railway came close to financial ruin more than once. Macdonald was forced to obtain a loan from the Treasury to save the CPR from becoming insolvent.

Sir John A. Macdonald died on 6 June, 1891 and was buried in the Cataraqui Cemetery in Kingston. He left a mark on the country’s political scene and is considered one of the most successful Prime Ministers of Canada. Macdonald has a record of 6 majority government victories and served as a Prime Minister for 19 years. By purchasing large territories of vacant land from the HBC, Macdonald succeeded in expanding the territory of Canada. He built economic barriers as a way of avoiding American influence and linked the provinces by rail. His goal was to keep the federation afloat and stimulate trade. Macdonald also drafted the British North America Acts under which Nova Scotia, Ontario, New Brunswick, and Quebec became united into the Dominion of Canada. The Prime Minister drafted two-thirds of the provisions and became known as the Father of Confederation. The British North America Acts are the core of the Canadian Constitution and were enacted by the Parliament of Canada and the Parliament of the United Kingdom. The Act of 1867 set the framework for the Canadian government, including the House of Commons and its federal structure.