The history of banking in Canada dates back to 1817, when the Bank of Montreal was founded. Other banks were established after arduous approval procedures and started unregulated banking activities. Under the amended British North America Act, currency notes could be printed not only by those institutions, but by provincial and federal governments, as well. The official currency was established in 1871, overruling the individual banks’ notes.

The currency of Canada is the Canadian dollar, designated with the symbol $, or – to mark a difference with the US dollar – with C$. Three years ago, in 2007, it held 7th place among the most traded currencies around the globe, after the US dollar, the Euro, the Japanese yen, the UK pound sterling, the Swiss franc and the AUS dollar. The country's banking system is deemed the safest one in the world, as well as the most efficient. According to the 2008 World Economic Forum report, Canada is ranked as the soundest banking system in the world. Canadian banks, widely known as chartered banks, were reported to include 8000 branches and over 17. 000 ATMs in the country. 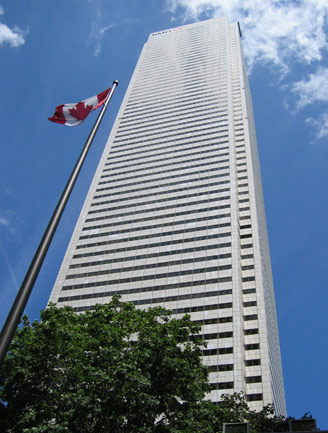 Canadian banks fall into two different groups - the "Big five" national banks and all the small secondary banks; this distinction is only functional in everyday commercial activities, since the two do not differ in legal status or regulatory categorization. The "Big five" include Royal Bank of Canada, TD Canada Trust, Canadian Imperial Bank of Commerce, Bank of Nova Scotia, and the Bank of Montreal. These are not Canadian institutions but divisions of international corporations. Retail operations of the "Big five" include activities in the fields of insurance, credit cards, mutual funds, and brokerage. Unlike the United States, where retail banking subsidiaries are within a holding structure, in Canada they are operated by the parent company. Some of the most important secondary banks are HSBC Bank Canada, ING Bank of Canada, the National Bank of Canada and the Mouvement Desjardins, which is in fact a coalition of credit unions.

All banks in Canada are classified as either domestic, foreign subsidiaries or branches of foreign institutions. Most of the second tier banks are domestic organizations. There are some insurance companies in the country, which have sprung out depository subsidiaries. The country has a very co-operative and dynamic financial sector, most active in the provinces in the west as well as in Quebec. It is also represented by credit unions (and caisse populaires in Quebec), numbering over 1500 in 2001. About one-third of the population belongs to a credit union, which makes Canada the country with the highest membership in the credit union movement per capita (over 10 million members). Over 70 percent of the people in Quebec are members of a caisse populaire and over 60 percent in Saskatchewan - of a credit union.

The retirement system in Canada is comprised of three levels: the Canada Pension Plan, Old Age Security, and private pensions and savings. Old Age Security provides pensions to Canadian citizens and residents who have lived in the country at least ten years. Under this retirement plan, Canadians are entitled to monthly pensions when they reach the age of 65. Old Age Canada is funded by the general tax revenues collected by the government of Canada. Established in 1966, the Canada Pension Plan provides benefits to Canadians who have contributed to the program and retire or become disabled. At the death of the contributor, the survivors of the deceased are entitled to the Plan’s benefits. The retirement pension is based on how long and how much one has contributed to the plan. Private pensions are two types: employer-sponsored and tax deferred savings as a part of the Registered Retirement Savings Plan.