Canada is the birth place of many famous writers, scientists, composers, musicians, and actors. Canada has been the country of origin and home country of researchers, inventors, Noble Prize winners, missionaries and martyrs, aboriginal leaders, humanitarians, visionaries and philanthropists, millionaires, as well as numerous professionals who contributed to the cultural legacy and prosperity of Canada, and to the human progress in general.

Canada is famous for its talented contemporary authors, with Canadian literature regarded as one of the world’s best.

Saul Bellow (1915-2005), born as Solomon Bellows in Lachine (Quebec), was a novelist and Nobel Prize laureate. His best known novel, The Adventures of Augie March (1953) is a humorous depiction of the Jewish life in Chicago. Another talented writer, Margaret Atwood (b. 1939 in Ottawa, Ontario) is a novelist, poet and critic. Her novels have been translated into twenty languages.

Margaret Laurence (1926-1987) was born in Neepawa, Manitoba. Before becoming a professional writer, she worked as a reporter for Winnipeg Citizen. Her novels A Jest of God (1966) and The Diviners (1974) won the Governor General's Award and were filmed.

William Patrick Kinsella (better known as W.P. Kinsella), born in Edmonton in 1932, is a famous novelist and professor in Literature at the University of Calgary. His short story Dance Me Outside was filmed.

Elizabeth Smart (1913-1986) was born to a prominent family in Ottawa, Ontario. A remarkable novelist and poet, she wrote her best-known novel By Grand Central Station I Sat Down and Wept. Considered her masterpiece, the novel was inspired by her dramatic love affair with the poet George Barker.

Alice Munro (b. 1931 in Wingham, Ontario) is a prominent short story writer whose works often appear in The New Yorker and The Atlantic. Three of her Short Story Collections won the Governor General's Award. 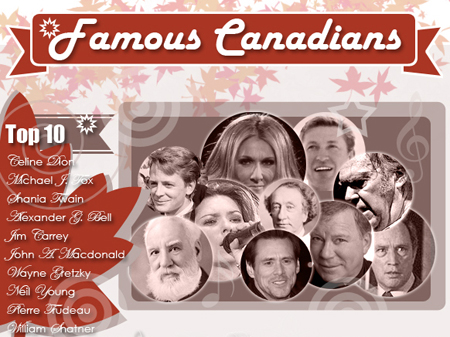 The music of Canada reflects diverse cultural influences, with a considerable impact on the musical heritage of the country. Among the numerous prominent contemporary singers are Alanis Morissette, Celine Dion, Nelly Furtado, and Shania Twain.

Alanis Morissette is an Ottawa singer and songwriter who won the Grammy Award. Her first international album, Jagged Little Pill, released in 1995, sold 30 million copies. Bryan Adams is another prominent singer, songwriter and guitarist from British Columbia. He is well-known both for his music and his philanthropic activities. Adams was awarded the Order of British Columbia and the Order of Canada.

Celine Dion is a Quebec singer who won the Grammy and Juno Awards. Gaining solid recognition in North America, Europe and Asia, Celine Dion is considered one of the best selling singers of all times.

Nelly Furtado is a British Columbia singer, famous for her unique voice, talent and originality. Neil Young is a Winnipeg singer, guitarist and songwriter. He is widely known for his varied career and particularly for his work in country-tinged folk rock and grinding, a lumbering type of hard rock. The Windsor country pop star Shania Twain (born Eilleen Regina Edwards) has won five Grammy Awards. With three albums certified Diamond by RIAA, she is the second best-selling artist in Canada.

Canada is the home country of many actors who were starred in world class productions and earn between 1 and 35 million dollars for a role in a single movie.

Dan Akroyd is a well-known actor, comedian, screenwriter and musician.World famous Jim Carrey is a comedian and movie actor who gained popularity for his roles in comedies and drama movies. The Anglo-Canadian actress Kim Cattrall gained worldwide fame as Samantha Jones in the HBO series Sex and the City.

For the Virtual Canadian Hall of Fame click here