What are major attractions in Canada?

There is a plethora of destinations and attractions that contribute to Canada’s tourist appeal and national identity. Canadians who wish to learn more about their country and visitors, wishing to experience more of this beautiful country, will find eye-catching, unusual, and unique attractions in every province of Canada.

Banff National Park is a national treasure, which attracts millions of visitors a year for fishing, biking, skiing, hiking, camping, or just relaxing. Banff is a resort town within Banff National Park. It offers a full range of restaurants, shops, and accommodation.

The Cabot Trail is a scenic roadway and highway in Inverness County and northern Victoria Country on Cape Breton Island. The Cabot Trail is famous for the vistas of the Atlantic Ocean and the Gulf of St. Lawrence and lush landscapes. The trail offers breathtaking views of Cape Breton where bald eagles and pods of whales are a common sight. Many tourists visit North America’s only Gaelic college at St. Ann’s, featuring displays on the early settlers in the region. Cape Breton offers four world-class golf courses: Dundee, Le Portage, Bell Bay, and Highland Links, which are among the Golf Digest’s Best Destinations Worldwide. The road signs along the Cabot Trail have a mountain logo, and the highway itself doesn’t have a signed route designation. 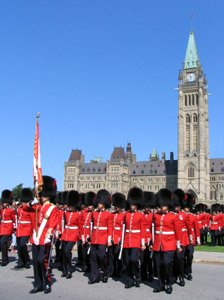 A number of different companies and media use the tower as a communications tower, among which Radio-Canada, CBC Television, Global, and CTV Toronto.

Knows as Fairmont Le Château Frontenac, Chateau Frontenac is the former residence of colonial governors and a grand hotel, found in Quebec City. In 1989, Château Frontenac was designated a National Historic Site of Canada and was the filming location for I Confess, featuring Anne Baxter and Montgomery Clift.

Calgary Plus 15 is the most extensive system of pedestrian skywalks in the world, with 59 bridges and a total length of 9.9 miles or 16 kilometres. The system connects a number of buildings in Calgary’s, including Bow Valley College, Calgary Tower, London House, Bank of Canada, and many others.

Canada is the home to over 3,000 museums – small museums, Canadian national museums, and huge metropolitan galleries. National museums are the Canadian Museum of Nature, the National Gallery of Canada, Canada Science and Technology Museum, and others. The Canadian Museum of Civilization is the most visited and most popular museum in Canada. The architectural centrepiece of the museum is the Grand Hall, featuring the world’s largest display of totem poles, with homes made by Aboriginal artisans. The First Peoples Hall is a permanent exhibition narrating the accomplishments, history, and contributions of Aboriginal peoples in Canada. The Royal Ontario Museum, found in Toronto, is a museum of natural history and world culture. With more than 40 galleries and 6 million items, the Royal Ontario Museum features extensive collections of meteorites, minerals, and dinosaurs, East Asian art, African Art, and Canadian history.