In the hope of raising awareness of cancer, Terry Fox ran a marathon across Canada. This made him an example of a cancer survivor patient who told people that cancer research needs to be done. Terry Fox was inspired to run across Canada in order to collect cancer funding to treat his cancer—osteosarcoma, a disease that starts out in the knee. Terry Fox was impressed by how cancer treatment increased his chances to survive.

Cancer Appeal
Terry Fox was diagnosed with bone cancer osteosarcoma in March 1977, after a reported car accident. It evolved from a knee injury which according to him made him vulnerable to the disease. After years of treatment, chemotherapy and application of recent medical technologies, Terry Fox’s chance of survival increased to 50 percent, as opposed to the previously predicted 15 percent. However, his right leg was amputated as part of the treatment.

Doctors have attributed the rapid recovery to Terry Fox’s positive attitude toward the disease. Spending sixteen months at the British Columbia Cancer Control Agency taught him a valuable lesson—the importance of medical advancement to the treatment of cancer.

As observed by Terry Fox, insufficient funding was given for cancer research and as a result, many people couldn’t survive, with treatment being absent. Angered by the under-funding of Canada’s cancer research, Terry Fox decided to appeal to the Canadian Cancer Society and run a marathon to raise cancer awareness and prove that he could overcome his sickness - something he told only to his dear friend Doug Alward.

He had a very impacting experience while in a cancer clinic, 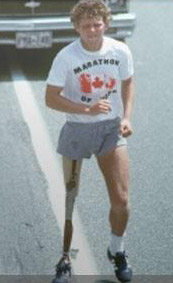 seeing people he knew would not beat the disease. Having a fervent desire to change things, he mapped a trek starting at St. John’s, Newfoundland all the way to Victoria, British Columbia.

Although he had an artificial leg, Fox learned to manage long periods of running. His hope of proving what he was capable of resulted in a simple yet meaningful run.

Impact of the Run
Terry Fox has had a strong impact on many, though he couldn’t complete the run due to disease complications. Every town he passed by donated a large amount of money for cancer research.

In the field of cancer treatment, the run of Terry Fox raised funds to allow in-depth research. His dream of improving the cancer treatment procedures in Canada was fulfilled.

Thanks to the collected funding, research on the lymphoma disease in Vancouver discovered ways in which patients were able to respond better to treatment. Also, funding coming from the Terry Fox Foundation helped the development of prostate cancer technology that increased the life expectancy of patients from 16 months to 18 months. Unfortunately, due to complications of Terry Fox’s cancer, it started developing in the lungs. Researchers such as Dr. Stephen Lam sought ways to treat lung cancer through gene pathways. Image Courtesy

The run also inspired other cancer patients to come out and prove that their diseases did not cripple them. This run helped patients undergo more rapid recoveries due to the positive attitude they had. Thanks to Terry Fox’s dream, many cancer patients and cancer researchers carved out a new reality.