The Group of Seven - Male Painters

If you have visited Kleinburg, Ontario while on a vacation or if you plan to, it is worth visiting the McMichael Canadian Art Collection. With over 6,000 masterpieces by seven male painters, you may explore this vast art collection. Famous for being landscape painters, the Group of Seven – Male Painters have created masterpieces, with their line of expertise on Canadian landscapes.

The Male Painters
Lawren Harris, Franklin Carmichael, Franz Johnston, A. Y. Jackson, J. E. H. MacDonald, Arthur Lismer, and Frederick Varley comprised the Group of Seven. Their work was in line with the ideas of European Impressionism. They began to paint around 1920 and continued throughout the World War 1. During the years of working together, they became the most renowned artists of their time. They held meetings at the Arts and Letters Club in Toronto and shared ideas about their art. The Group of Seven inspired future and contemporary painters of the time who became prominent Canadian artists.

The Group of Seven’s Founding and History
Employees of Grip Ltd., a design firm in Toronto; the Group of Seven met to exchange views on art and life. They kept on sharing their thoughts and artistic ideas up to the World War I. Other members joined the group of seven and contributed with their artistic skills. As a result of more people joining in, the original group was renamed the Canadian Group.

At the onset of World War I, the informal group fell apart. 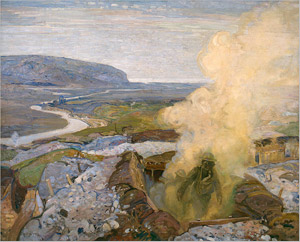 Jackson and Varley were employed as war artists during this period.

After the war, the original seven reunited and reformed the group. Their unification boosted the Group of Seven’s creative spirit, and they continued traveling throughout northern Ontario. The group visited the Algoma and Muskoka regions and sketched landscapes, developing new art techniques. By 1920, the group, under the name Group of Seven, opened their first exhibition.

This event was an eye opener for many artists who considered that the Canadian landscape was unworthy of and not to be painted. Although reviews of their first exhibition were mixed, during the next decade, the Group was recognized as a pioneer of a novel Canadian school of art. Their influence continued to increase and reached their peak by 1931.

Modern Influence of their Art
The Group of Seven was renowned for its nationalistic painting. Many artists did not see a point in painting the Canadian landscape. At that time, Canada had a dominion status, and the colonial mentality was typical for the minds of many artists. The Group of Seven sought to disprove these ideas, revealing the beauty of the Canadian scenery. Their work had a huge impact on modern artists, and many of today’s painters have tried to imitate the journey that the Group of Seven made to reminisce the beauty of Canadian landscapes. Canadians turned more nationalistic, thanks to the Group of Seven’s call for Canadian art. This, combined with different artistic influences, gives an unique air to Canadian art.