What type of money do they use in Canada? What currency does Canada use?

The official currency of Canada is the Canadian dollar, which is abbreviated with C$. The Canadian dollar was printed for the first time in 1817 by the Bank of Montreal. This is a way of distinguishing it from other dollar-denominated national currencies. The Canadian dollar was adopted in 1858 and is considered a benchmark currency. Other currencies that were used in Canada during different periods include the Canadian pound, Newfoundland dollar, Nova Scotia dollar, Prince Edward Island Dollar, etc. In 1871, the Canadian Parliament adopted the Uniform Currency Act with the aim of replacing all currencies with a common Canadian dollar. This happened gradually. The Prince Edward Island dollar was in use until 1873 while the Newfoundland dollar was in circulation until 1949. Canada chose to adopt the dollar and not the pound sterling because of the widespread use of Spanish dollars in North America in the 18th and 19th centuries. The standardization of the US dollar is another reason why Canada adopted the dollar.

Today, the Bank of Canada prints dollar banknotes, and they are legal tender in Canada. Canadian coins are minted by the Royal Canadian Mint. Bills are produced by the Canadian Bank Note Company as well as the British American Bank Note Company. The wording on the banknotes is in French and English, which are the official languages of the country. The title and name of the monarch are printed in Latin (Latin circumscription). The phrase that appears on Canadian banknotes reads ‘Elizabeth II, by the Grace of God, Queen'. 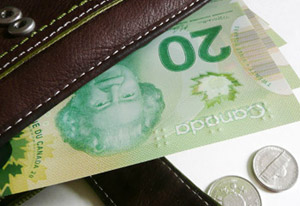 Canadian bills are bright in color, which makes them easily distinguishable. They are easy to distinguish from American bills, which are green in color.

The Canadian dollar is also called ‘buck’ like the US dollar. The term loonie distinguishes the Canadian currency from other national currencies and is used in the context of the currency markets and foreign exchange trading. The Canadian dollar is called ‘le dollar’ in Canadian French, and terms such as ‘piasse’ and ‘piastre’ are equivalent to buck. ‘Huard’ is the French term for the loonie and stands for loon in French. Hence, the animal is depicted on the face of Canadian coins.

Canadian coins and dollars are accepted in some Canadian snowbird enclaves (people from Canada, the US Midwest and Northeast who spend the winter in warmer locations). The Canadian dollar is also accepted by businesses that operate in the northern cities of the US, and US dollars are accepted by some businesses in Canada. Recent changes to the composition and appearance of Canadian coins have made it more difficult to use them in the US. At the same time, it is common to find 25, 10, 5, and 1 cent coins in Canada.