What is the Royal Canadian Mint?

RCM is is responsible for the production of all coins that are in circulation in Canada. The institution may also manufacture and release in circulation coins on behalf of other countries. RCM’s other activities involve the design and manufacturing of collection coins made of gold, silver, and palladium, as well as platinum bullion coins, medals and tokens. In addition, the Royal Canadian Mint offers to its clients refinery and assay services. However, the body cannot introduce or eliminate coin denominations. This is a responsibility of the Canadian Department of Finance. Moreover, the Mint does not manage the circulation (or print) bank notes. The Bank of Canada is responsible for these tasks.

Mintage experts probably know that since its establishment over a century ago, RCM has been following a policy of progressive technological improvement. For instance, the mint has adopted a multi-ply technology in its plating process which allows the embedding of electronic signatures in the coins. The Royal Canadian Mint also takes pride in having produced the first colored circulation coin in the world – the 2004 Remembrance Day 25 cent piece with a red poppy on the reverse. In 2008, the Mint was tagged as one of the best one hundred employees in Canada by a local crediting agency. 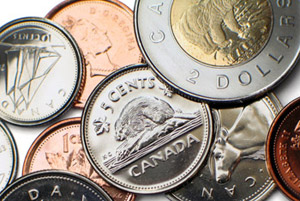 Interestingly enough, for the first half a century of coinage in Canada, the country’s coins were not stuck at home, but at the mints in London and Birmingham. After that, Canada’s coinage needs grew as the country strengthened its positions as an independent nation. The first branch of the Royal Mint opened doors in Ottawa, in 1902.

Following lengthy discussions and debates, in 1971, the Canadian authorities agreed that a new mint should be built in the province of Manitoba, as the old mint in Ottawa had already become very much outdated and even obsolete. In 1976, the new facility was officially opened, and it began to manufacture coins and other products made of precious metals.

However impressive the building of the new mint may be, there is still much to be done in terms of security, as the Winnipeg facility keeps a long record of thefts. The first failure of the mint’s security system occurred in 1988, when a humble janitor illegally enriched himself with $150,000, stealing various objects from the mint. In 1996, a machinist stole over eighty ounces of gold from the mint in Winnipeg, but the facility’s managing board decided to drop the charges against him, as they were too embarrassed to admit that their allegedly strict security system had failed again. Finally, in 2001 a mint employee was convicted of smuggling counterfeit coins from the Winnipeg facility of the Royal Canadian Mint.